Blog
Sign UpClose
Thanks for joining us!
Something went wrong while submitting the form. Try again later.
Archive

It's official: Prey is now on Ubuntu and Debian 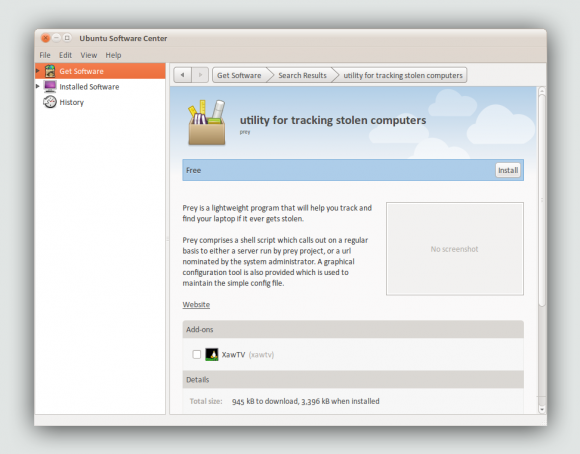 Good news Ubuntu users! If you already upgraded to Ubuntu Natty Narwhal (11.04) then you'll be able to install Prey directly from Ubuntu's official package repositories. We've been working side by side with the Debian devs so now you'll be able to find Prey in Ubuntu's Software Center or get it by opening up a terminal and typing the famous one-liner:

The package is listed on Ubuntu's universe repository so be sure to enable it through Synaptic it (Settings > Repositories > check Community-maintained Open Source software) if you want to use it.

Now, there's a few differences between the official Prey version and the one bundled in Debian and Ubuntu. Keep on reading!

To comply better with the Debian package policies, some stuff has been moved from their regular locations. While our package keeps everything on /usr/share/prey, on the Debian/Ubuntu Prey version:

The graphic configurator is not available yet as there are some things that need to be tweaked before it can shipped on Debian. This means that if you use the Debian/Ubuntu version, you'll need to setup your configuration by hand for the time being (sudo gedit /etc/prey/config). Control Panel users need to enter their device and API keys while standalone users need to enter a Check URL and setup their SMTP server settings.

The Debian policy is that packages should not upgrade themselves, but rather through the system's package manager. This means that the Debian/Ubuntu version will not auto-update as the official client does. This also means that you will get updates with a small delay, depending on the time it takes Debian or Ubuntu to sync their repos with the upstream version.

The current version available on Ubuntu's universe repo is 0.4.4, which means that you won't be able to use the features we've been adding lately, such as On Demand activation, Hardware Scan or Offline Actions. Prey 0.5.3 is already on Debian's unstable repo so hopefully we'll get that soon on Ubuntu too.

In other words, if you're considering upgrading to Pro we recommend to stick to the official client for now. Otherwise you'll miss the good stuff!

Can I switch from one version to the other?

Yes but you'll need to uninstall the one you're running first, otherwise your computer might explode into pieces. Jokes aside, the Debian/Ubuntu version will not be aware of the previous installation so things might get hairy if you don't remove your previous installation (e.g. a version might try to overwrite the other one's files when upgrading).

Remember if you wish to install the official release as usual, you can always do by downloading the .DEB package and using GDebi or simply dpkg -i prey-*.deb. So thanks to everyone who made this possible, especially Debian ninjas Alessio Treglia and Jelmer Vernooij!

About the author
Tomás
Pollak

Co-founder of Prey, the most simple and powerful suite to protect devices and data.

We were surprised by uninformed allegations that claimed Prey’s Anti-theft solution had taken part in the tampering of e-voting tablet devices. Here is our statement.

Here’s the first of several blog entries telling about our company’s inner workings: How we nailed customer satisfaction making it one of our core values.

Good news everyone! You can now use Prey On-Demand on your iPhone, iPad or your Android phone or tablet whether you have a Pro account or not.

Prey is now available for iPhones and iPads at the App Store. Open source, for free, tested and ready to kick some burglar butt. Here’s a detailed explanation of how the iOS client actually works.