Home Or Office: Where Will We Be Working In The Next Few Years?

A forced transition to remote work has made us question whether we will still work from cubicles and bullpens or take a new leap: working from home. 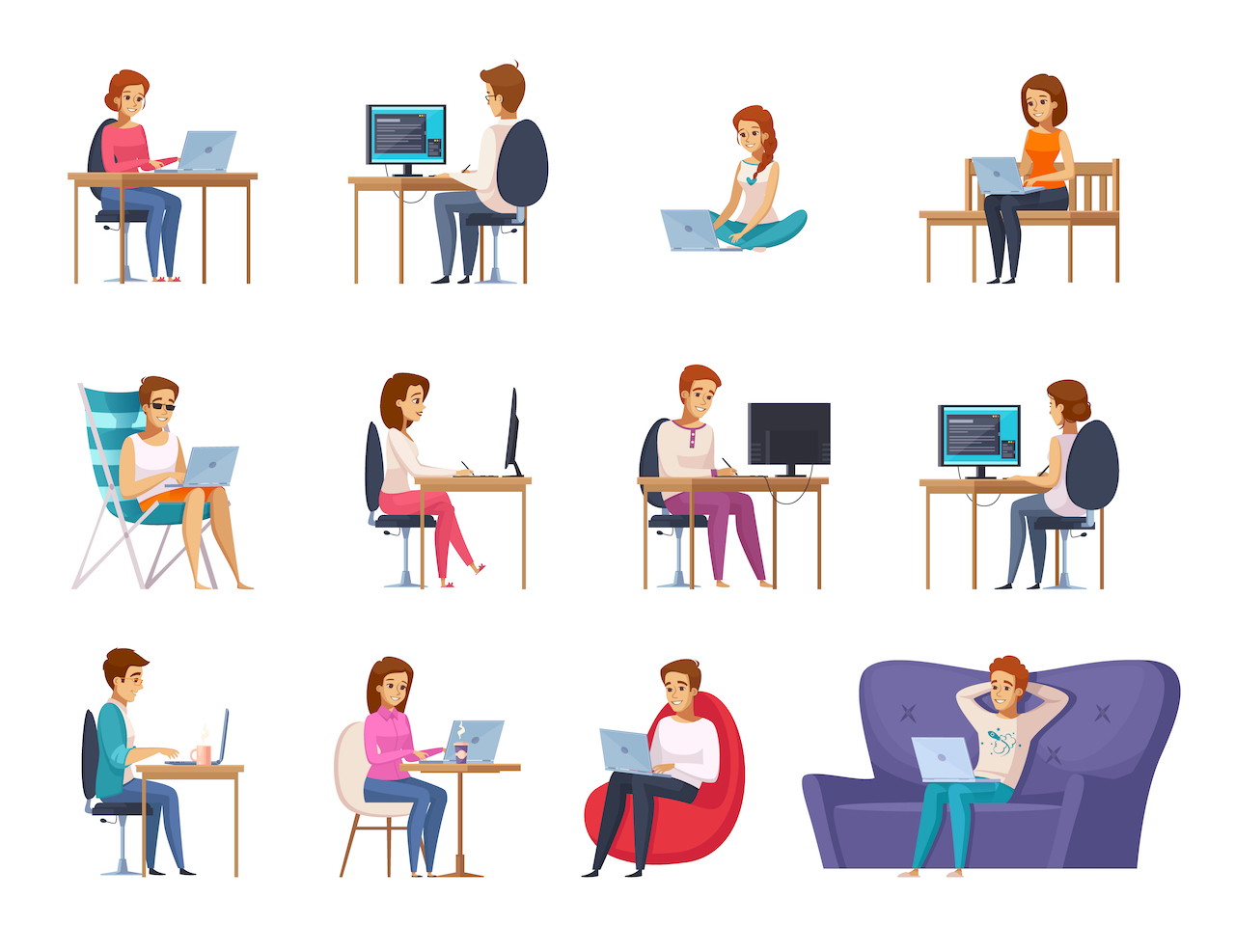 First, it was Google, then Facebook, and now Twitter. Even if big tech companies aren't necessarily the norm, the big three have decided to jump on the remote work bandwagon even after the pandemic. And it’s not by luck: thousands of people are going to stay at home instead of going back to the offices.

With the arrival of a virus that confined us to our personal spaces, the world began to change. To adapt. Companies around the globe transitioned from work to home, and their employees, after several months of meetings by Zoom and couch-made decisions, will voluntarily change the gaze of their bosses for the attention of their children or pets. It’s an undeniable change, which has been dubbed “the new normal”.

However, this change will not come without resistance. This goes beyond saying: the world of work is nothing more than a great tradition that we have been repeating as a society, between ethnic groups and territories, in very similar ways. Putting on a suit, sitting in a cubicle from 9 to 5, Monday through Friday, having lunch for an hour and carpooling are codes, and there are many people out there –in many cases, in positions of power– who want to dump the new normal into the garbage can as soon as possible.

The ancient history of office work

Our offices as workspaces are a rite that we have followed without much question. The surprising thing is: this rite is not really that old. Offices are the answer to the modernization of employment in the middle of the 20th century, after almost three centuries of constant change and refinement of industrial work. In the 1940s and 50s, modern printing machines and typewriters were fuel for the exodus: the labor force in factories, fields, and mines migrated to noisy bullpens. Women and minorities joined this change, now free from the chains of tradition and ready to join these new spaces.

Over time, the office became a different, safe space. Also, this same space and its distribution became a control tool. For Foucault, the school and the Army were disciplines of the body; the office presence was the logical form of work of this disciplinary society. Time controls, dress codes, hierarchy flourished; all of them embedded with new responsibilities. It would be the birth of a new tradition.

Of course, the workspace is different from home, and that difference has its advantages. The separation between work and home establishes a difference between what’s public and private. It also draws a clear line between what happens in the work environment –productivity– versus the family and recreational space of the house. The office environment is also a social space, and therefore secure in terms of peer interaction, sociability, and human contact.

In the same way, it can be monitored and controlled in ways that would be unthinkable if that space did not exist. The rules and the different office services are usually different from what we can find at home. Free coffee, casual Friday, office hours, Intranet? All born under the wing of these new spaces.

However, this normality has ended up producing a good number of disadvantages that we cannot deny. The office became a place of alienation: to belong to this safe and different space is to lose your own identity. Long hours of work and less time at home, made us think that our real lives were not so valuable. We began to miss our families and friends. Free time became a longing. The rhythm of work began to exhaust us, to extinguish us. Stress was on the rise, the commute to work became tedious and the return was the only moment of peace.

The answer to that –thanks to our hyperconnected reality– was remote work:  an option to make employment and home compatible. Unfortunately, that option was never the rule, but the exception.

Remote work with no obligation

If we bring together a dozen managers of large companies and ask them about remote work, they will most likely spurt out a list of reasons why not to implement it.

For the management world, working from home has measurable downsides: a decrease in productivity, the difficulty of micro-managing employee time, and the technical feat of keeping an employee working at home with office resources. It's often argued that working from home is insecure for the company in terms of cybersecurity an argument that we have made in the past and that it reduces the value of spaces that the company already uses, such as its offices.

However, and outside of the most tangible reasons, the problem with remote work is a problem of tradition. The uncomfortable truth behind the refusal to send employees home: the system seems unprofessional.

The truth is that remote work began to be a possibility because the world took its paradigm to the extreme. The wide possibility of being connected thanks to powerful internet connections was the fuel to transfer productivity to homes, and long working hours and office speed were the catalysts for a chemical reaction that found strong resistance on those believers in the traditional work model.

This moment in history is linked to a generational change, key in many social processes. The baby boomers, accustomed to the standard office model –and for the most part with guaranteed lives, families, children– are on the verge of retirement. Meanwhile, hordes of digital natives and millennials populate entry-level jobs, valuing free time and personal growth far more than gross productivity.

This contrast has tipped the scales towards remote work for years, where various studies pointed to this job transformation, by the hand of millennials, as a sort of "salvation" for the rest of the workers. Back then, those born at the end of the 20th century were considered "lazy and entitled".

However, the arguments for or against this change had to be frozen solid with the arrival of the pandemic. Quarantine violently changed the way we work and made us remember our own usefulness, even from home. This forced change threw us into a decisive social moment, where the balance can turn towards remote work and away from the bureaucratic culture of the offices.

This force is part of a multitude of changes that are already taking place in business. The possibility of contagion from COVID–19 will continue to be quite high, so the offices will seek to minimize the number of employees in common spaces and meeting rooms. At the same time, companies are scrapping their office spaces and renegotiating contracts, which has sunk the office real state business. The icing on the cake is the probable migration: hundreds of thousands of people with remote job possibilities will migrate from spaces with astronomical prices –a rental in Silicon Valley is not exactly cheap– to places with a better quality of life.

This new era of remote work will not be easy for workers either. As soon as businesses assume that their workforce will stay home forever, a new era of control will begin. Many employees who stay at home will have to use monitoring software to control their productivity –software that has been already developed– and keep that "feeling" of performance safe.

The good news is that tech companies that drive innovation are going in a good direction. A few days ago, Twitter and Square, led by Jack Dorsey, announced that their employees will be able to continue working from home as soon as the quarantine is finished. This decision is expected to end up pushing –or at least serving as an example– for many other digital businesses.

It will take a long time for the social conflict between tradition and remote work to elicit a real change. A lot of companies in the United States do not plan to open their offices until the last quarter of this year, with severe security measures. We also do not know if more companies will definitely get on the remote work phenomenon, or consider this quarantine as an outlier.

The truth is that even predictions give remote work an advantage. In 1964, science fiction writer Arthur C. Clarke predicted a series of technological advancements that would be the rule fifty years later, such as the internet, 3D printing and robotic surgery. The only prediction he seemed to miss was that workers would not commute to work daily and travel only for pleasure.

It seems that a pandemic was necessary for the prediction to be fully accurate. Keep a watchful eye without even looking. It's simpler than you think!
Show me some tricks

More than 80% of the US workforce is working from home since the start of the pandemic. And now business organizations must likewise grapple with the challenges brought by remote operations.

For some of us, working from home is a blessing in disguise. We traded the nosy eyes of our coworkers and superiors for the peace and quiet of our home. But what about the organizations that weren't ready for remote work? What did the pandemic cause in our bosses, accustomed to watch us every day?

It is key that remote workers separate their work/personal digital environments, and take protective measures to avoid an attack results in a chaotic domino effect that puts company and personal data at risk.

Having an office space that is healthy, cool and comfortable is no easy task. Here are some tips to have the best place to work remotely.